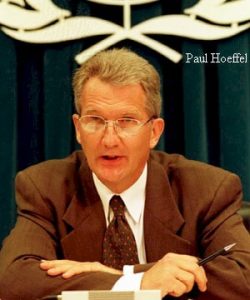 Paul Hoeffel, Chief, NGO Section of the United Nations Department of Public Information, addressed the World Congress of Chiropractic Students (WCCS) on Oct. 6, 2003, at the Universite du Quebec a Trois‑Rivieres, Canada. His presentation, titled, “The United Nations and Civil Society: Global Health Issues,” touched on a few of the many global health care campaigns that will require the participation of NGOs (non‑governmental organizations) and other “civil society partners.”

In the opening of his address, he noted that the WCCS organizers became aware of the work of the Public Information office through the World Chiropractic Alliance (WCA), an NGO associated with the United Nations through his office.

“WCA has worked closely with the NGO Committee on Health, one of the most active NGO groups working on global health issues within the UN, and has had fruitful exchanges with the World Health Organization (WHO), based in Geneva. Writing about their involvement in UN meetings in their journal and newsletters,” Hoeffel continued, “they have brought news and information about the work of the UN to your community and supported the UN in its efforts to provide relief for many health conditions without invasive surgery and expensive medicines.”

He told the students that health problems and concerns are becoming more international in scope as the world becomes more interdependent.

“The forces of globalisation are accelerating the potential for diseases, some of them ancient and some of them new, to move around the world more easily, increasing the transmission rates to new and vulnerable populations on a global scale,” he said. “But what is encouraging is that the global efforts to contain and combat and even to eradicate diseases have also become increasingly sophisticated, effective and global in scope.”

Hoeffel emphasized the importance of NGOs like the World Chiropractic Alliance, as well as other groups working with the United Nations.

“By itself, the UN is a slow‑moving organization that is chronically under‑funded and lacks the direct links with local communities around the world,” he explained. This makes the work of NGOs vital to the success of UN projects.

NGOs associated with the Department of Public Information, work to “communicate information to their constituencies about the work of the United Nations in their thematic areas,” he added. “They have access to UN Headquarters and can participate in our NGO conferences, briefings, communication workshops as well as use our NGO Resource Centre. Our annual conference this year in September, attracted 2,000 representatives from 600 NGOs around the world. It focused on the theme of human security and dignity, and global health concerns were the focus of several discussions.”

Concluding his remarks, he told students, “The United Nations provides the framework, standards and guidelines that enable individual countries to share their experiences, best practices and resources with their neighbours to assist them to address their health problems with a global support network rather than in isolation. Our partnerships with civil society organizations and NGOs strengthen this global network immeasurably, and are its only guarantee for success in the years ahead.”